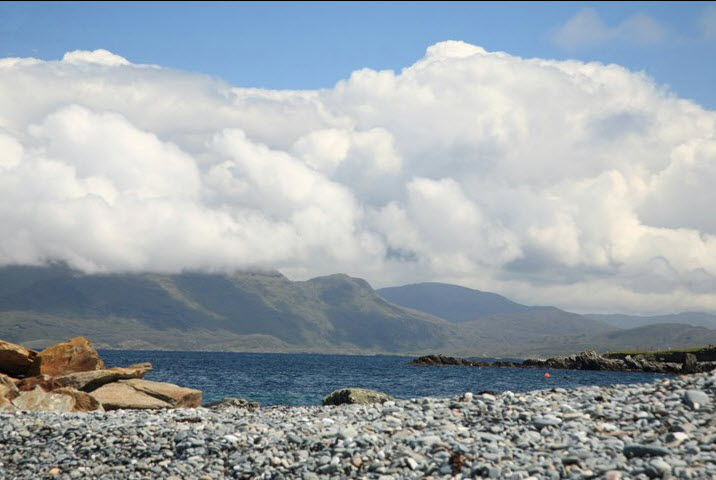 No easeful meadows or delightful springs,
Nor visionary islands lure it best;
But far off on the margin of the west,
A sea-grey house, whereby the blackbird sings
— Non Blandula Illa, Oliver St. John Gogarty

Oliver St John Gogarty was a man of some standing in the world. During his student years in Dublin, he caroused with James Joyce and became immortalized as “Buck Mulligan” in Ulysses. He was a successful ear, nose and throat surgeon by the time he married Connemara woman Martha Duane.

In 1917, the Gogartys went looking for a country residence in Martha’s home county, and they purchased Renvyle House “out of the proceeds of my teetotalism” as Oliver wrote to a friend. Far out on the Renvyle peninsula, a bockety car ride along the barely-functional road from Clifden, it was almost the perfect retreat. Almost, because their slumbers were often disturbed by strange footsteps and the sudden quenching of candles — Renvyle House, it appeared, had a ghost.

Among the earliest guests of the Gogartys were W.B. Yeats and his bride, Georgie Hyde-Lee, who spent their honeymoon in Connemara. The new Mrs Yeats fancied herself as a psychic and took it upon herself to communicate with the restless spirit. He identified himself as “Athelstone Blake”, who’d died the previous century at the age of 14, and he promised to stop causing disturbances once he was “placated with incense and flowers”.

Gogarty was a well-known nationalist and had supported the rebels in 1916. But he supported the 1921 Treaty and so, when the Irish Civil War broke out, he found himself on the opposite side to many of his former comrades. In January 1923, he was having a bath in his Dublin home when a gunman broke down the door. Pulling on his clothes and a fur-lined coat, he was bundled into a car, driven to a house in Chapelizod, and interrogated in a dark cellar.

He eventually told them they needed to let him outside or there would be an unpleasant puddle on their floor. Standing beside the roaring Liffey, he handed the heavy coat to his two guardsmen — and plunged into the icy river. At the Phoenix Park, he climbed up the banks and reported to the Police Station, shivering and wet but otherwise well.

Shortly afterwards, Gogarty moved to London where he could feel safe. But his enemies struck out by setting alight his family home in Connemara.

So Renvyle House, with its irreplaceable oaken panelling, is burned down. They say it took a week to burn. Blue china fused like solder…
Memories, nothing left now but memories. In that house was lost my mother’s self-portrait, painted when she was a girl of sixteen, her first attempt in oils… Books, pictures, all consumed; for what? Nothing left but a charred oak beam quenched in the well beneath the house. And ten tall, straight towers, chimneys, stand bare on Europe’s extreme edge.
— As I was Going Down Sackville Street, Oliver St John Gogarty

Gogarty’s first thought was to abandon Connemara altogether, but his wife was having none of that. Throughout the long fight for compensation, Gogarty decided that he had looked down enough noses and throats for a lifetime and would reinvent himself as a travelling lecturer, with his wife as hotelier. The Renvyle House Hotel opened with a great ceremony on the 30th April 1930.

There are a lucky few who have discovered that West Galway is an unrivalled place for their own and their children’s holidays, and to those who appreciate natural beauty and the delights of sea and mountain, no more perfect spot in the British Isles could be found than the modern and extremely comfortable Renvyle Hotel, near Clifden.
— Connemara’s Glories, “The Queen” magazine, February 1934

It still runs as a hotel today. In 2011, my brother Paul and his wife Edda celebrated their wedding there. Many of the guests stayed awake until the early hours of that morning, partying in the same rooms where Oliver and Martha Gogarty once entertained their guests. There was no sign of Athelstone Blake or any of the other ghosts.