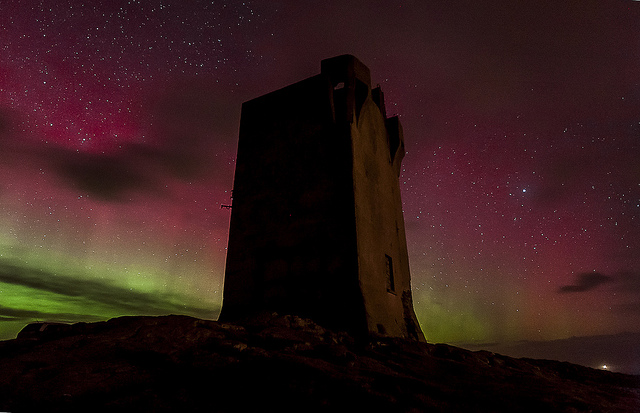 The Cree Indians saw them as the spirits of their dead ancestors. The Finns thought they were caused by a fox running so fast across the snow that its tail caused sparks. The Japanese thought a child conceived beneath them would be lucky, while the Icelanders believed that a lucky child would be born when they shone — but only if its mother didn’t look directly at them. The Vikings thought their glow came from the shields of the Valkyries. According the Estonians, they were the paths of horse-drawn carriages carrying heavenly guests to a wedding.

I am speaking of course of the Northern Lights, the Aurora Borealis (there is an equivalent in the Southern Hemisphere, the Aurora Australis, but few human habitations are in that region). We know now that they are caused by electrically charged particles from the sun colliding with gases in the earth’s atmosphere. They are normally seen at latitudes much further north than Ireland, but just occasionally, they come flickering our way.

Increased solar activity, particularly coronal mass ejections (CMEs) improve the likelihood of aurora displaying at lower latitudes. However, clouds can cover up this activity, and as any Irish person can tell you, clear skies are rarer than we’d like. Artificial lights compete with the natural glow, so they can only really be seen away from towns.

Compose in darkness.
Expect aurora borealis
in the long foray
but no cascade of light.
— North, Seamus Heaney

Malin Head, at 55.38ºN, is the northmost tip of the island of Ireland; although it’s in the Republic, it’s farther north than anywhere in Northern Ireland. “From Malin Head to Mizen Head”, signifying the full length of the country, is a familiar phrase from anyone who’s heard the sea area forecast. Far up on the Inishowen peninsula, Malin Head is a popular spot for viewing seabirds, particularly for their migrations in spring and autumn.

And on a rare occasion, on a dark clear night when the sun has thrown its brightest sparks out towards earth, you might catch a glimmer of those dancing lights. 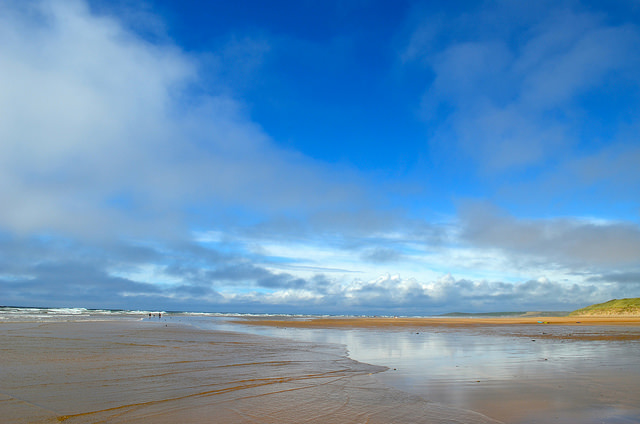 Is it smugness or insurgency
That makes them say ‘Emergency’?
I feel it lacks the urgency
Of World War Two
— ‘Be Careful not to Patronise the Irish’, song from Improbable Frequency

In April 1941, the men at an Irish army observation point watched as a fishing boat approached Tullan Strand near Bundoran. This would have been a normal sight, except the catch of the day was not herring but a Saro Lerwick sea-plane. Its pilot, British Army Officer Denis Briggs, had been forced to ditch when he ran out of fuel off the coast of Donegal.

So as Briggs and his plane were brought ashore, the local Irish army thought they knew what to do. They impounded Briggs’s plane and brought the crew to the nearby Finner Army Camp.

They were not aware that an under-the-table deal had been made between the British and Irish governments. British planes could use the air route over north Leitrim and south Donegal that linked the Atlantic Ocean to Northern Ireland, so long as they kept above a certain height, avoided the Finner camp, and didn’t make a nuisance of themselves. This route would become known as “The Donegal Corridor”.

Officer Briggs had, through no fault of his own, breached the accords of the “Donegal Corridor”. However, after a certain amount of diplomatic wrangling, a camouflaged aircraft lorry arrived from Northern Ireland with aviation fuel and the crew could take off again. Media censorship ensured that the news didn’t travel far, so Ireland’s neutrality was officially kept pure.

Three years later, the crew of a British Halifax aircraft was not so lucky in their flight through the Donegal Corridor. They were gathering weather-forecasting information that was essential to the war effort, so they were forced to go out despite atrocious conditions. Tragically, the plane hit the cliffs near the Fairy Bridges at Bundoran, and all ten men were killed. A monument to the Halifax crash can be seen today at Tullan Strand. 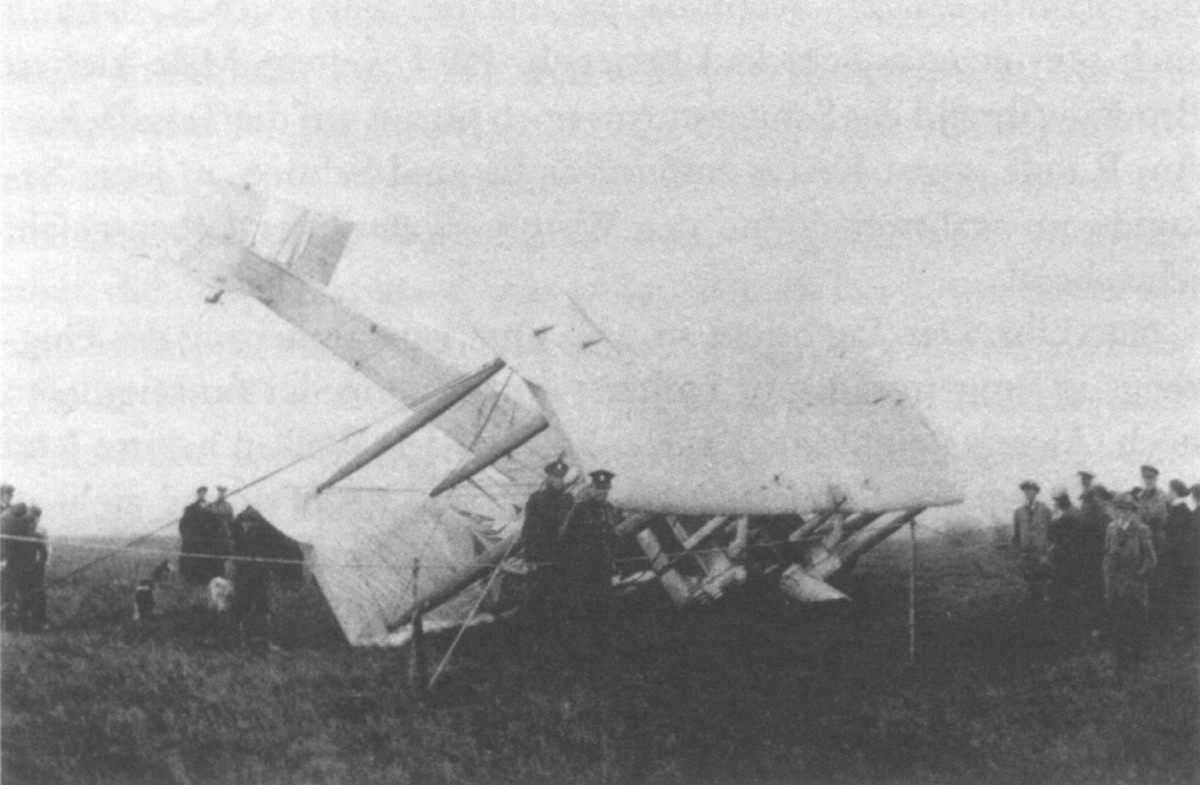 Photo of Alcock and Brown in Clifden, public domain

15th June 1919. The two airmen flew eastwards into the dawn. The heating in their flying suits had stopped working a few hours after they’d taken off from Newfoundland, so they warmed themselves with whiskey-laced coffee. Lieutenant Arthur Brown and Captain John Alcock had survived several close calls, flying part of the way upside-down in freezing fog.

When the sun appeared, Alcock stripped the gloves from his freezing fingers and measured their location using the sextant. They were on course, but the controls threatened to freeze up if they didn’t move into warmer air. He pushed the joystick forward and descended into the cloud, where there was no visibility beyond the nose of the plane.

The two men were soon sitting in a puddle as the ice in the cockpit melted. But then, to their exultation, they spotted land! They had intended to fly direct to London, but under the circumstances a touchdown in Ireland seemed like a good idea.

Alcock flew towards Clifden at a low height, circling the streets as he looked for a convenient field. The locals strained their necks and dropped their jaws as this strange, noisy machine buzzed above them in the sky! Out by the Clifden wireless tower, some men waved towards the plane, as if inviting it to land in the green meadow beyond.

Alcock didn’t realise their waves were a warning about the bog he was about to land in. The Vimy Vicker, veteran plane of the Great War, ploughed a deep furrow before burying its nose in the mud of Derrygimla Moor. After 16 hours and 3040 km (1890 miles), Alcock and Brown had become the first aviators to make a non-stop crossing of the Atlantic Ocean.

The men who’d tried to warn them jumped from one grass tuft to another as they made their way to the plane.

“Anybody hurt?” they asked. “Where are you from?”

The crowd broke out in laughter. Brown gave one of them an orange from Newfoundland as proof this wasn’t an elaborate joke.

News of the landing was relayed from the wireless station, just short hop from where the plane had crash-landed. When Tom “Cork” Kenny got a message at the offices of the Connacht Tribune in Galway, the journalist knew this could be the scoop of his life. He jumped into his V8 car and drove to Clifden to pick up the pilots, keeping them away from other newspapermen until he had his exclusive.

Alcock and Brown spent the night at the Railway Hotel (now the Meyrick) in Galway, and received a hero’s welcome the following day despite the heavy rain. But they were in a hurry to get to London and collect their prize. The Daily Mail had offered £10,000 to ‘the aviator who shall first cross the Atlantic in an aeroplane in flight from any point in the United States of America, Canada or Newfoundland to any point in Great Britain or Ireland’. At the London Royal Aero Club, Captain John Alcock handed over a bundle of letters that had been entrusted to him by the postmaster in Newfoundland. Air mail was invented!

Alcock and Brown were knighted by King George V for their achievement. Sadly, Alcock didn’t enjoy his success for long; that December, he was in a fatal air crash in fog over France. But the inhabitants of Clifden would never forget the day two men dropped out of the sky to meet them. Today, the Alcock and Brown Hotel takes pride of place in the town square.