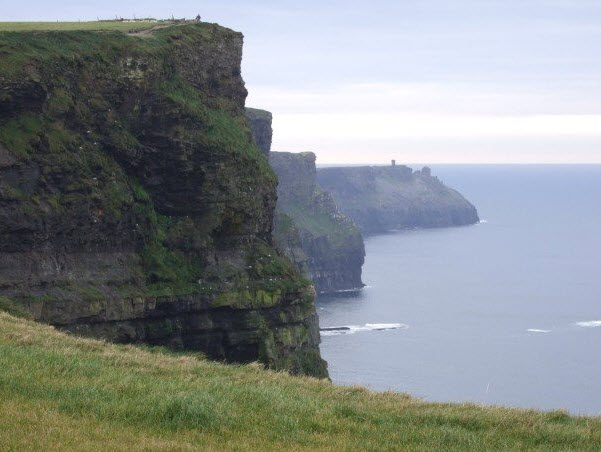 Photo of Cliffs of Moher by P.J. McKenna

Vizzini: He didn’t fall? Inconceivable!
Inigo Montoya: You keep using that word. I do not think it means what you think it means.
– The Princess Bride, 1987

Actor Wally Shawn was terrified of heights. He sat into the bicycle seat, which was attached to a forklift, which was on the side of a rubber-faced mountain. Each of the other actors — Robin Wright, Mandy Patinkin, and André the Giant — took their own seats beside him.

The 2.24 metre (7ft 4) André was supposed to be carrying the others, but he was due to have back surgery and in constant pain throughout the filming. He self-medicated with alcohol, carrying around a beer pitcher that looked like a regular glass in his huge hands. All the scenes where he carried other crew members were done with ramps and harnesses, or occasionally a body double.

Before the actors were a few inches off the ground, Wally was about to pass out. André petted him on the head like a child and said “Don’t worry, I’ll take care of you”, and his gentle voice relaxed Wally so that the take went without further problem.

There had been several attempts to adapt William Goldman’s 1973 novel, The Princess Bride, to the big screen. Early casting choices would have seen Arnold Schwartzenegger as Fezzik, Danny de Vito as Vizzini, and Carrie Fisher as Buttercup — parts that eventually went to André the Giant, Wally Shawn, and Robin Wright when the book was finally brought to screen in 1987.

In the film, Vizzini and his sidekicks Fezzik and Inigo Montoya (played by Mandy Patinkin), kidnap Buttercup and sail away with her, pursued by a mysterious man in a mask. Ahead of them loom the terrifying “Cliffs of Insanity”, which are in fact the Cliffs of Moher in County Clare, Ireland. The scenes are a mix of matte paintings and the actual cliffs.

As the quartet scale the cliffs, they are followed by the masked man (Westley, played by Cary Elwes). Stuntmen dangled on harnesses over the cliffs to get these dramatic shots. When they finally reached the top, Vizzini cuts the rope, but the masked man hangs on and continues to climb.

The ruins at the top of the Cliffs of Insanity are quite different from the green landscape atop the Cliffs of Moher; this part was filmed in studio. Mandy Patinkin and Cary Elwes trained for several months so they could fence both left and right-handed, their sword fight has gone down as one of the most famous in film history.

Mandy had been offered his choice of parts, but he chose that of Inigo Montoya for a personal reason. The “six-fingered man” who killed Inigo’s father became the cancer that had killed Mandy’s father 15 years earlier.

I’ll become the greatest sword fighter, and my reward will not be to be in this movie that ended up being what it’s become to all these people; my reward will be that my father will come back.

– Mandy Paninkin, interviewed by Cary Elwes for his book As You Wish: Inconceivable Tales from the Making of The Princess Bride

The Princess Bride had only modest success at the box office, but when it was later released on home video it became a cult classic and is one of the most frequently-quoted films of all time.

My name is Inigo Montoya... oh, you know the rest!

Fiona Hurley returned to her native Galway after sojourns in Dublin, Glasgow, and Valencia. She works as a technical writer for a multinational I.T. company. Her articles have appeared on the websites Bootsnall.com and SavvyAuntie.com and she has been published by Crannóg and Number Eleven magazines. She loves reading, swing dancing, learning weird facts, and planning journeys to places that she may or may not visit. View all posts by fionahurley