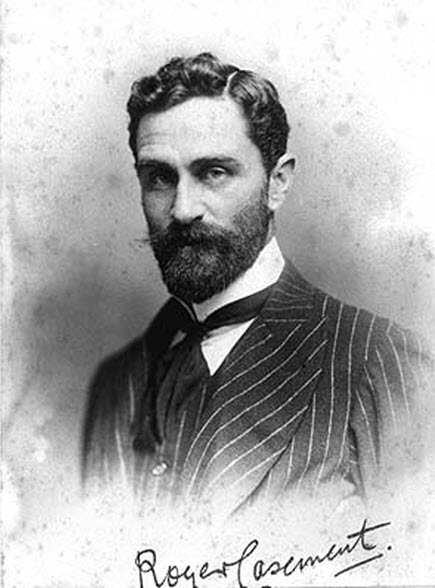 Photo of Roger Casement from National Library of Ireland

As the sun rose on Good Friday, April 21st 1916, three soaking men pulled a wooden rowboat to shore at Banna Strand in County Kerry. Roger Casement and his companions had been set down by a German U-Boat but their dinghy had overturned in the waves.

The sandhills were full of skylarks, rising in the dawn, the first I had heard for years – the first sound I heard through the surf was their song as I waded in through the breakers, and they kept rising all the time up to the old rath at Currahane.

51-year-old Casement was exhausted and unwell. When he collapsed on the sand, the two other men — Robert Monteith and Daniel Bailey — realised he could travel no further.

They had come from Germany, by way of Northern Scotland and Rockall, a long and dangerous route during wartime. But Casement had travelled still farther in his life. When he’d been born into a prosperous Anglo-Irish family at Sandycove in Dublin, most would have assumed he’d have a comfortable future. But Casement’s restless nature would not let that happen.

Most Europeans who went to work in the Congo Free State were able to ignore the atrocities that made their lives there possible. Casement could not. Initially employed as a clerk, he was later commissioned by the British Government to investigate exactly how King Leopold had been running his fiefdom in central Africa. The truth was more shocking than anyone had imagined. His report outlined the “enslavement, mutilation, and torture of natives on the rubber plantations“, and the international pressure eventually forced Leopold to relinquish his personal holdings.

He’d first contracted malaria in the Congo. As he struggled onto Irish shores for the first time in many years, he was suffering a relapse of that disease. His companions left him in the shelter of an ancient rampart known as McKenna’s Fort, and they went to find the local branch of the Irish Republican Brotherhood.

As he curled in on himself, shivering with cold and fever, did he think about those days in the Congo? Did he also recall his later investigations into the abuse of the Putayamo Indians in Peru? He was known as a great campaigner whose searing words brought injustice to light. Would his admirers see him the same if they knew of his other activities, of the furtive pleasures he took with young men he met on his travels?

When did his razor-sharp sense of injustice begin to focus on his native land? He must have known, when he tried to persuade German government officials to provide arms and training for the IRB, that the British authorities would seen him as the worst kind of traitor. But the Germans provided far less equipment than was needed, and now his main aim was to contact the Irish rebels and advise them to call off the uprising.

He waited, surrounded by 2000 German rifles, listening to the skylarks, watching the primroses and wild violets that bloomed in the prehistoric ring fort. Did he wonder about the strange, circular fate that had brought him to this place?

Now the R.I.C. were hunting
For Sir Roger high and low,
They found him in McKenna’s fort;
Said they: “You are our foe”,
Said he: “I’m Roger Casement,
I came to my native land,
I mean to free my countrymen
On the lonely Banna Strand”.

The local Irish constabulary arrested Casement at McKenna’s Fort. The uprising took place on Easter Monday without the German weapons, and ended after six days with the surrender of the leaders.

Casement was tried for treason in London. His impassioned speech from the dock gained him new admirers around the globe, including in other parts of the British Empire who saw parallels in their own national situations. But during the trial, the British Government circulated passages from the “Black Diaries”, accounts of Casement’s homosexual activities in Congo and Peru. Nationalists protested that these diaries must have been faked, but they succeeded in their aim of tarnishing Casement’s reputation and turning off would-be supporters.

Roger Casement was hung at Pentonville Prison on August 3rd 1916. His remains were returned to Ireland nearly 50 years later.The old fort by Banna Strand has been renamed Casement’s Fort.

Fiona Hurley returned to her native Galway after sojourns in Dublin, Glasgow, and Valencia. She works as a technical writer for a multinational I.T. company. Her articles have appeared on the websites Bootsnall.com and SavvyAuntie.com and she has been published by Crannóg and Number Eleven magazines. She loves reading, swing dancing, learning weird facts, and planning journeys to places that she may or may not visit. View all posts by fionahurley

One thought on “Casement’s Last Stand”